One of the most important tasks in data management is report generation. The Quick Report Editor is one of the tools used to design reports. You use the Quick Report Editor to create reports based on a selection of records. These can be ad-hoc reports intended only for one-time use or they can be save to be used perpetually.

With Quick Reports you can:

An Example of a Quick Report

Keep reading for the steps used to create this report. 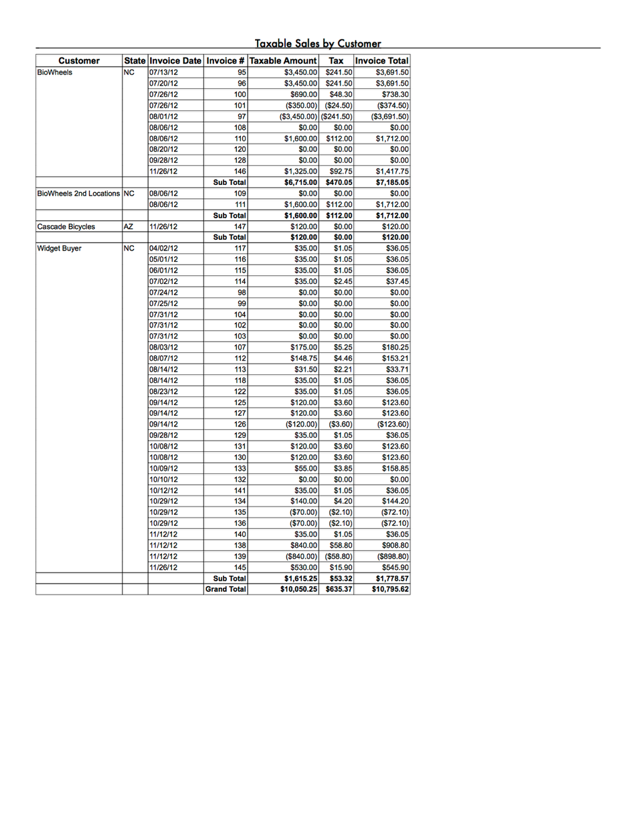 Zoom: An Example of a Quick Report 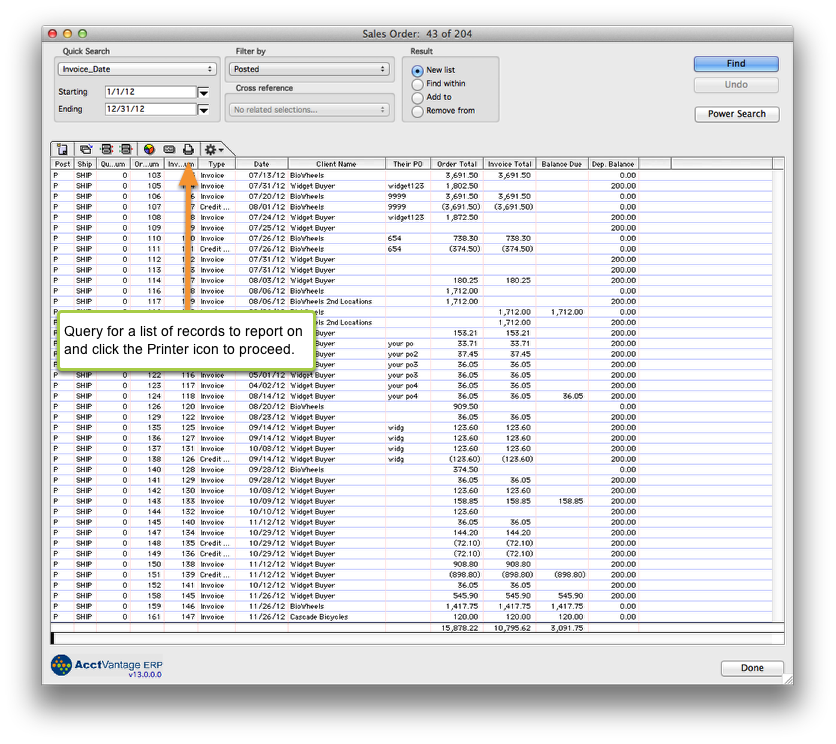 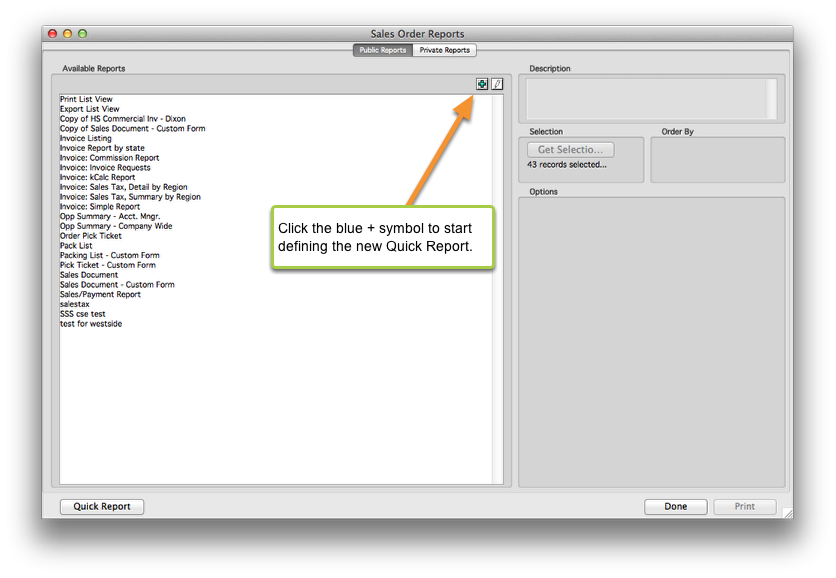 4. Add Fields to appear on the report.

This example report is being generated from the Sales Orders & Quotes window. The Master Table for this window is the [Sales_Document] table.

*The Master table of your Quick Report must coincide with the table where you are selecting records to report on!

The fields in this report are:

Zoom: Add Fields to appear on the report.

You can sort by any field in the report (ascending or descending). Just drag the field(s) to the Sort Order box in the order you want them to be sorted by. 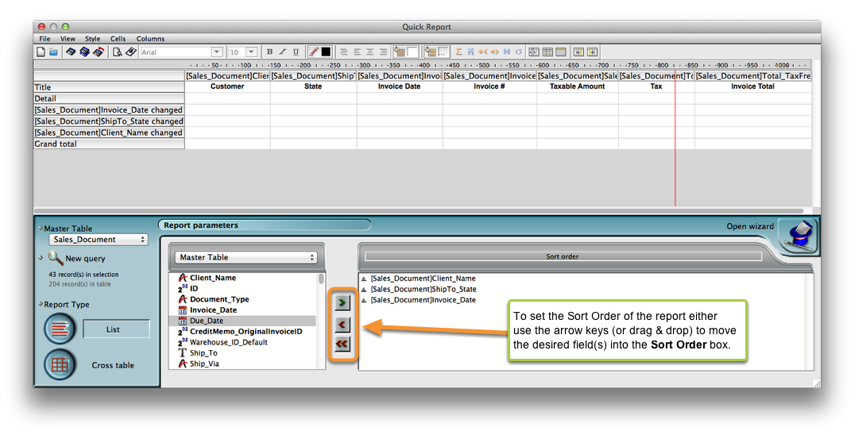 By default the column headings will be labeled as the field name that is selected. The wording can be changed to reflect something more meaningful. 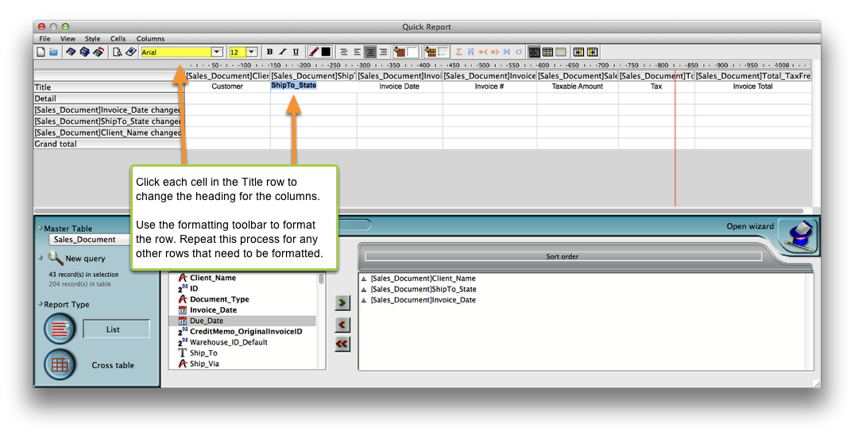 The Quick Report Editor has a list of out-of-the-box number and date formats. You are free to use any of these or build your own formats based on the same logic as these. 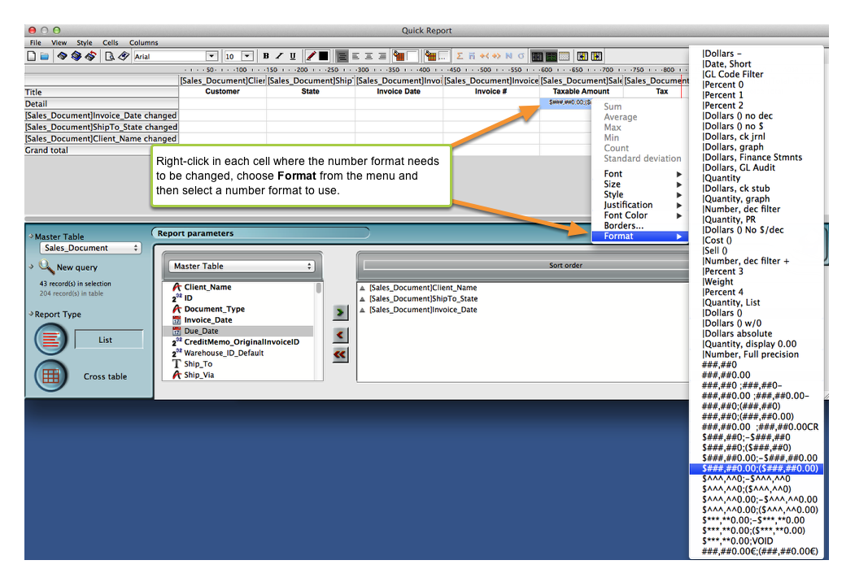 In this screenshot you can see I've added Sum calculations to each of the Taxable Amount, Tax and Invoice Total columns. 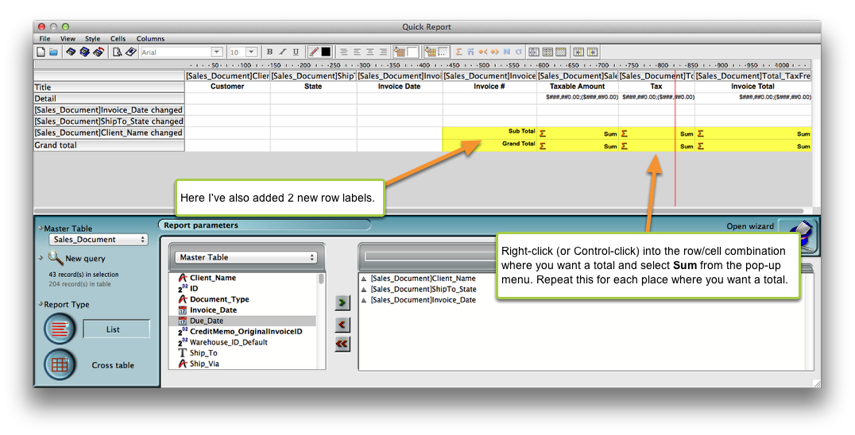 Quick Reports can be formatted so that any Repeated Values are hidden. For example, if a selection of records includes the same Client Name repeatedly, it can be displayed only one time so as to not clutter the report. Any field where you don't want to show a Repeated Value must also be included in the Sort Order section

Zoom: Add a Header and/or a Footer. 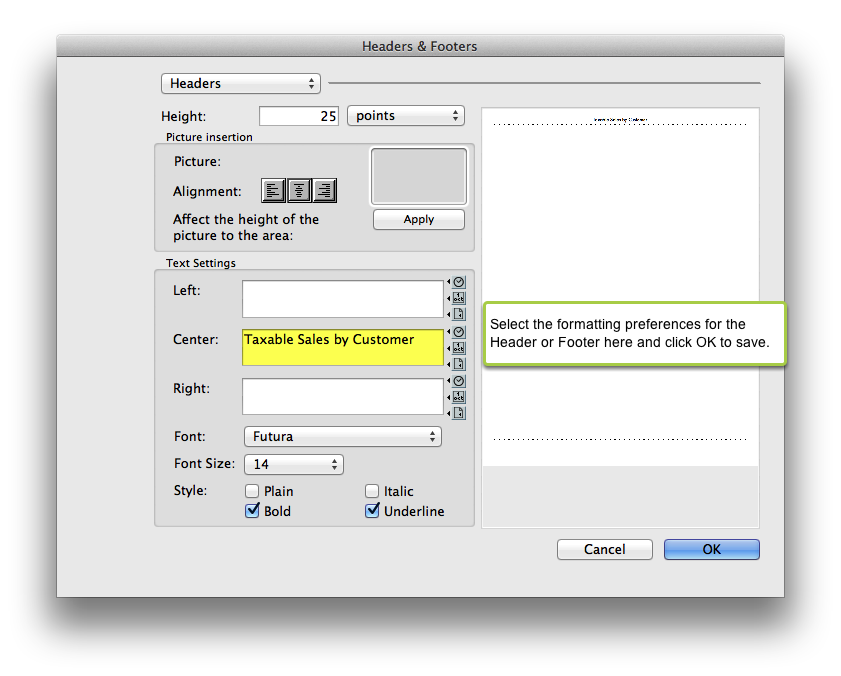 11. Save the completed Quick Report. 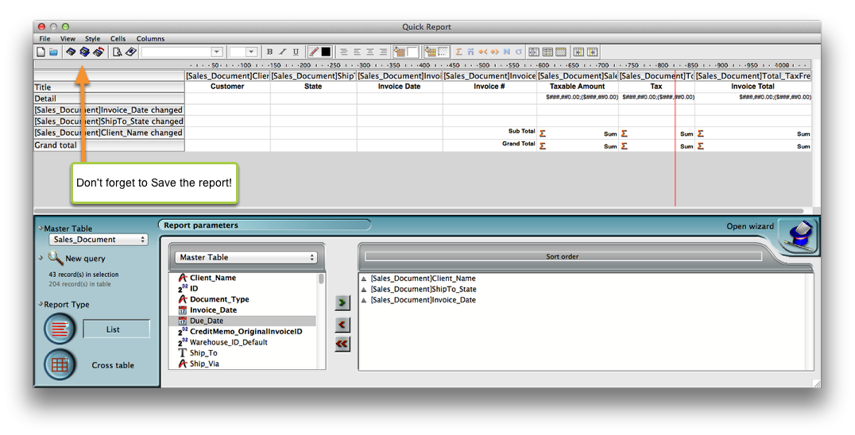 Zoom: Save the completed Quick Report. 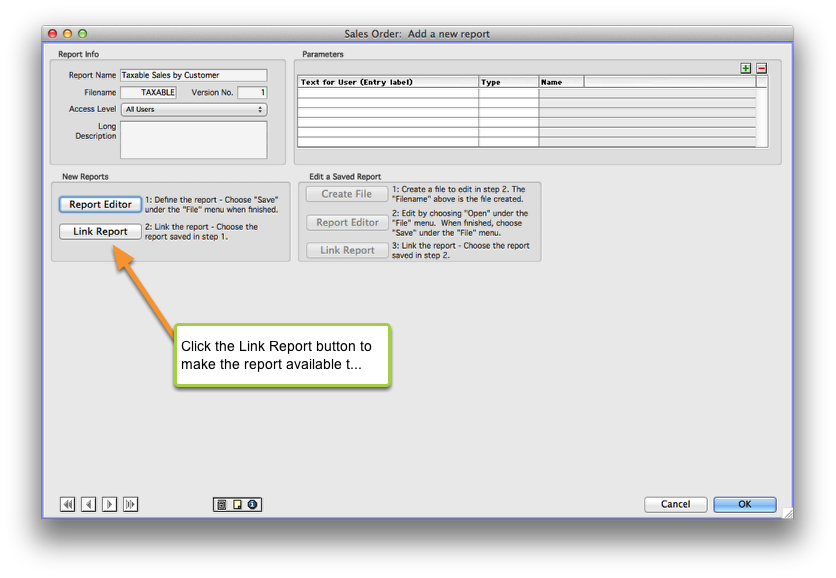 13. Select the report file to link.

Quick Reports have the file extension *.4qr. (This is the file that should be on your desktop.) 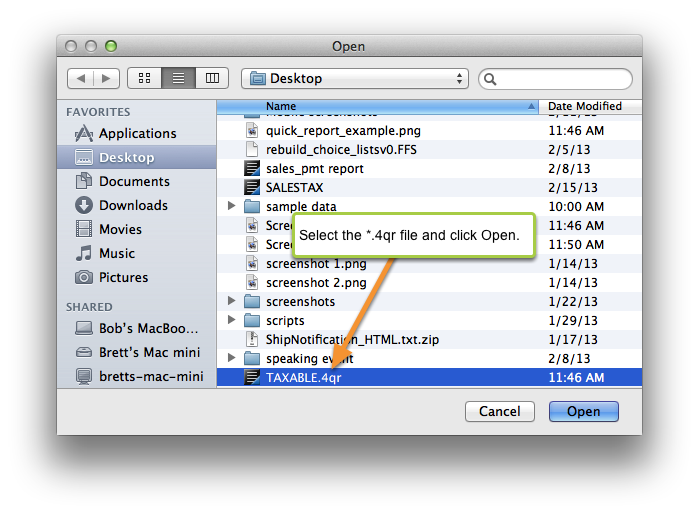 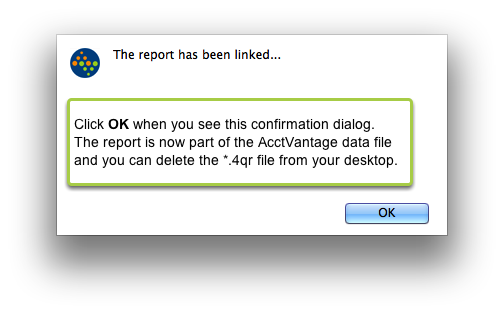 15. The Quick Report can now be run from the Reports window.

See the beginning of this lesson for an example of what this Quick Report will look like when it's printed. 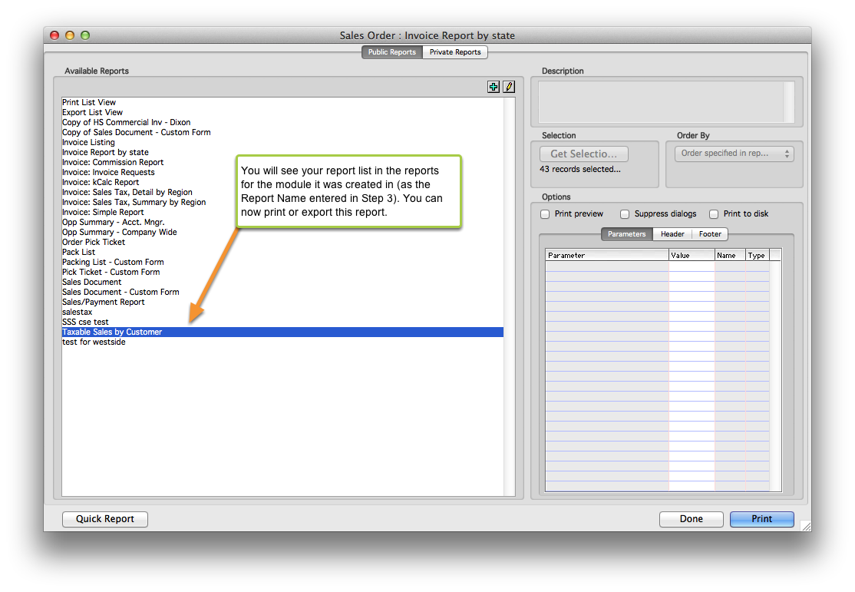 Zoom: The Quick Report can now be run from the Reports window.